Charlie Eustis, PE is an ASCE Double Honoree for the Second Time

GeoEngineers’ Principal Geotechnical Engineer Charlie L. Eustis, PE is a double honoree at the state and local level for the American Society of Civil Engineers (ASCE) in Louisiana.

David P. Sauls, PE, chairman of the board and senior principal in GeoEngineers’ Baton Rouge office said, “We’re not surprised by this recognition of Charlie. He has been highly involved with ASCE throughout his 40-year engineering career, and he is one of our best technical resources, especially when it comes to coastal engineering.”

Starting as an active student member of the ASCE in the early 1970s, Eustis continued his involvement by working on several committees and holding every office within the Baton Rouge Branch. He has also served as president and board member of the ASCE Louisiana Section, receiving the ASCE President’s Medal in 2009 for his work on the board. 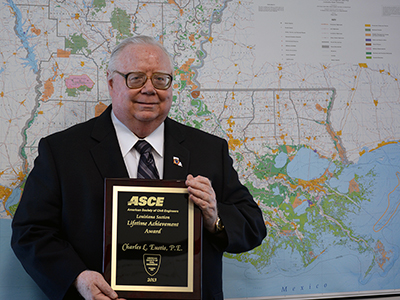