Researching the ownership, acreage and use of public lands in Washington state just got easier thanks to a new online, interactive map of natural resource and recreation lands. GeoEngineers’ technology-development team built the map for the Washington State Recreation and Conservation Office (RCO) after the state Legislature tasked the agency in 2013 to provide an inventory of lands in Washington owned by federal, state and local governments. Previously, these public land inventories were only available as printed documents.

“This is the first time public lands information has been brought together in an electronic format easily accessible by the public,” said Kaleen Cottingham, RCO director. “This map will be very useful to people who want to see what’s happening in their communities and to government agencies for planning purposes. It takes the mystery out of government land purchases and puts them on the Web for all to see and use.”

The map allows people to click on a location and learn which agency owns the land, the number of acres, main use of the land and cost of acquisition if acquired within the past 10 years. The map includes information on land owned by cities, counties, the federal government and three state agencies – the State Parks and Recreation Commission, the Department of Fish and Wildlife and the Department of Natural Resources. The public can search government-owned parcels by owner and principal land use. In addition, the interactive map provides details about RCO land-acquisition grants.

“This project created a challenge to take complex information and present it in an intuitive way,” said Scot McQueen, chief strategy officer for GeoEngineers’ technology team. “We tried to create something that people would get excited about using and that still would give them detailed information. The end design is elegant and easy to understand.”

This is the second data visualization project GeoEngineers’ technology team has completed for RCO. The first project, the Washington Water Cruiser app, was released in May and helps boaters find places to launch their boats or tie up for a weekend. 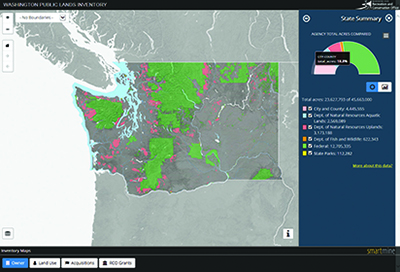