GeoEngineers recently received awards for two entries in the American Council of Engineering Companies (ACEC)-Washington 2011 Engineering Excellence Awards competition. This annual program recognizes the state’s best engineering achievements, and the awards are among the most prestigious in the industry.

The Olympic Pipeline Span Protection project won a Silver Best in State award for Exceeding Client/Owner Needs. This project featured an 85-foot section of pipeline span located inside a city park in Bellingham, WA. This section of the pipeline spans a creek 25 feet above the creek surface, and several large trees located on or near the steep ravine banks posed a potential threat. The client was also concerned that the exposed pipeline could be vulnerable to intentional or accidental gunfire. GeoEngineers designed a bullet-proof steel truss supported on drilled micropile foundations to protect the pipeline from tree fall or gun fire while creating the least disturbance to the pristine site.

GeoEngineers also received a Bronze award for the Cap Sante Marina Site Restoration project. Our multidisciplinary team worked with the Port of Anacortes to develop a strategic approach for jump-starting this marina redevelopment through a combination of creative cost recovery and aggressive remediation. GeoEngineers completed a full cleanup and restoration of the Cap Sante Marine site, enabling the Port to implement its Master Plan and secure a long-term lease of the property to an upscale restaurant. This would be the first in a series of major projects at the Port, providing a model for future cleanup projects throughout the region. 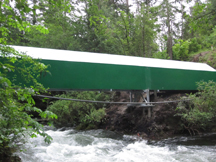