The long-awaited replacement SR 520 Bridge over Lake Washington is now open to traffic. The new bridge provides a major six-lane artery connecting Seattle, Washington to Bellevue and suburbs to the east. GeoEngineers played a pivotal role on the Kiewit-General-Manson Joint Venture design-build team, providing geotechnical consulting, design and construction support for the eastern bridge landing near Evergreen Point Road and for the casting of gravity anchors used to stabilize critical portions of the bridge’s floating expanse. 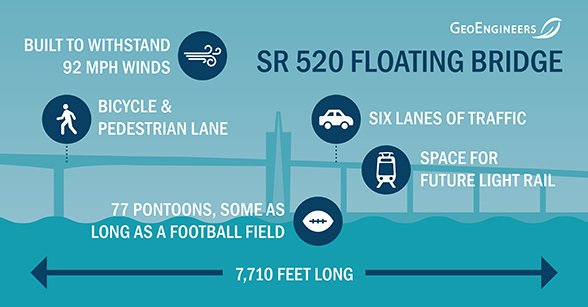 Construction has been ongoing since 2012, after the Washington State Department of Transportation (WSDOT) determined the old SR 520 Bridge to be in poor condition, and a significant seismic risk in the event of an earthquake.

The existing and new bridges are both designed around floating pontoons moored by anchors in the lake bed. The new structure is wider and longer than the bridge it is replacing—its 7,710-foot span makes it the longest floating bridge in the world. Improvements include an additional High-Occupancy Vehicle (HOV) lane in each direction (six total lanes of traffic), a wider shoulder, a bicycle/pedestrian lane, and expansion capacity for future light rail.

The GeoEngineers team provided geotechnical designs and consulting for the three large piers supporting the east bridge landing, along with groundwater investigation, dewatering plans for the cofferdams used during construction of the piers, and recommendations for retaining walls throughout the site.

Notably, the GeoEngineers team recommended a change from using drilled shafts to support the east approach to using shallow foundations—a move that saved the client approximately $20 million. The team used a combination of field explorations and sophisticated 3D numerical modeling to evaluate the proposed shallow footings and determine their performance under a variety of load conditions.