GeoEngineers is proud to have been part of the design team for the Coastal Protection Restoration Authority’s (CPRA) Caminada Headlands Beach and Dune Restoration project, which recently won the national award for 2019 Best Restored Beaches from the American Shore and Beach Preservation Association (ASBPA). The Caminada Headlands project, located southwest of Grand Isle, Louisiana, restored more than 13 miles of beach and dune along the coastline.

“Congratulations to the whole team – it is great to see that the project is getting recognized on a national level,” said David Eley, GeoEngineers’ project principal. Governor John Bel Edwards stated, “CPRA has restored more than 60 miles of barrier islands, beaches and dunes, but this is the largest single ecosystem restoration project the state has ever undertaken.”

The Caminada Headlands project had its challenges. In 2010, GeoEngineers was already mobilized and drilling soil borings on the project site when the Deepwater Horizon oil spill occurred. There were days when GeoEngineers was not allowed on the beach because of clean-up efforts. To complicate matters even further, the prime engineer resigned from the project due to their desire to support BP during the spill and the potential for a conflict of interest with the state.

Despite the barrage of obstacles, GeoEngineers effectively communicated with the state, adapting the scope as work continued to meet budget constraints due to standby time caused by the spill. Coastal Engineering Consultants (CEC) eventually led the Caminada engineering project team, and the relationship that started with Caminada eight years ago has grown since. CEC and GeoEngineers continue to work on restoration projects along Louisiana’s coastline. Today, the newly restored Caminada Headlands support coastal wildlife, protect interior marshes from inclement weather, and guard Port Fourchon, which facilitates the production of nearly 18 percent of the country’s entire oil supply. For more details on the Caminada Headlands Beach and Dune Restoration project, visit our project page. 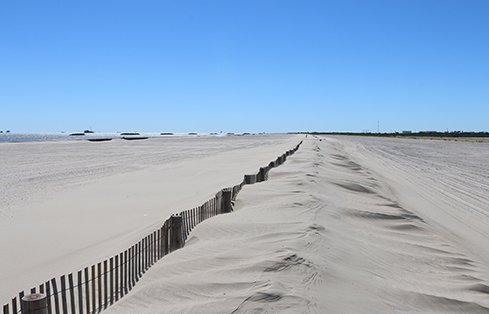