GeoEngineers is helping officials in Harrison, Arkansas, analyze and repair a sinkhole that suddenly reopened in April—the latest in a series of collapses in the Chelsea Circle community. The first sinkhole appeared in 2017, but so far, repair efforts have not had long-term success. Local authorities backfilled the sinkhole twice since then, but it has continued to reopen and expand, threatening private property, public safety and local sewer infrastructure. After this latest collapse, the city contracted GeoEngineers for assistance with a permanent repair.

These recurring sinkholes are likely related to underlying karst terrain, characterized by partially dissolved limestone riddled with a complex network of voids. Heavy rain and other changes to groundwater can cause sudden sinkhole collapses in karst terrain.

“We have had a tremendous amount of rain in the Midwest and South this summer and will likely see many more sinkhole collapses,” said Principal Geological Engineer Gary Pendergrass, who is leading GeoEngineers’ project team.

Pendergrass and his team from GeoEngineers’ Springfield office have decades of experience characterizing and repairing sinkholes in similar conditions throughout the Midwest and South. They have completed hundreds of karst investigations and stabilized dozens of sinkhole collapses.

The team’s first step will be a detailed geophysical investigation of the sinkhole. They plan to use geophysical imaging techniques to characterize and delineate subsurface voids. After completing an analysis of site soils and bedrock, karst development, sinkhole dimensions and configuration, the team will make recommendations for stabilizing and closing the sinkhole.

“Each sinkhole collapse is unique,” Pendergrass said. “Some can be stabilized by constructing a graded filter, while others require grouting or constructing a concrete cap.”

The team plans to work quickly. Pendergrass estimates just two days to complete geophysical data collection followed by about a week of analysis and a recommended repair strategy for the sinkhole. If city officials approve GeoEngineers’ approach, the team will also provide a detailed remedial design and be ready to oversee construction at the city’s request.

The sinkhole also attracted the attention of KY3 News in Springfield, Missouri. Gary Pendergrass spoke to reporters about the sinkhole and GeoEngineers’ plans to repair it. See the video and article here, and read more about GeoEngineers’ work with sinkholes and karst terrain here. 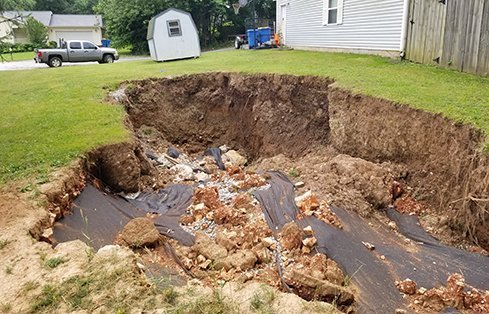