On Friday, May 20, 2011, GeoEngineers staff members participated in a ribbon-cutting ceremony celebrating the re-opening of the Seafarers’ Memorial Park and the completion of the former Scott Paper Mill Site environmental clean-up project in Anacortes, Washington.

GeoEngineers designed and coordinated the two-year, $34-million-dollar project for the Port of Anacortes, in partnership with the State of Washington Department of Ecology and the Kimberly-Clark Corporation, former owner of the Scott Paper Mill.

At the ceremony, Becky Darden, project manager for the Port of Anacortes, addressed the crowd and praised GeoEngineers for its work. She named John Herzog, Principal in Charge of the project and technical lead; and the core engineering team, including Abhijit Joshi, Chris Bailey and Robert Trahan. She credited John for his vision for the site that helped shape the overall plan and was central to the success of the project.

GeoEngineers delivered a full suite of services to the Port of Anacortes, including environmental clean-up, construction management, and geotechnical, biological and applied technology expertise. The team kept the project on schedule and on budget by running 24 hours a day when necessary—without a single accident.

Herzog noted, “This project is a total success and our client recognizes that we made the difference. The State holds the project out as their example of how they want Puget Sound cleaned up. The local public is also totally pleased with the outcome.” 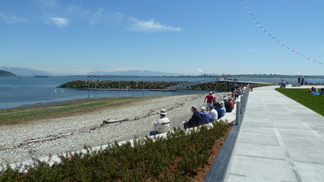