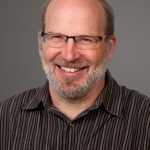 Rain always brings an increased risk of landslides, but extremely high precipitation rates throughout the Pacific Northwest in October have geologists, engineers and owners of vulnerable infrastructure on alert for geologic hazards.

October typically receives a lot of rainfall, but last month’s rates were incredibly high. October is the start of the water year in the Pacific Northwest. It represents the month when soil moisture starts to increase again following the relatively dry months that typically extend from June through September (when the region averages less than 1.5 inches of rain per month). The average precipitation for October from 1945 through 2015 was 3.51 inches according to data from the Western Region Climatic Center at the University of Reno. According to the National Oceanic and Aeronautical Administration, the total precipitation at Sea-Tac Airport for October 2016 was 10.05 inches, or nearly three times the average, and more than a quarter of the average rainfall for the water year!

When meteorologists forecasted a massive storm for the region in the middle of October, we had an anticipatory call from one of our clients to get phone numbers of staff they could call over the weekend in case of a landslide. Fortunately for all, most of that storm missed us here in the Puget Sound, but pointed to the need to be prepared, especially since it looks like this fall and winter will continue to be wet.

A study in California indicated that when monthly precipitation exceeds about 140 percent of the average, the occurrence of landslides becomes more likely. We have tracked that precipitation patter for some of our clients here in the Pacific Northwest and elsewhere in the conterminous United States and found that statistic to be relatively accurate as a rough measure.

For some of our clients, we have evaluated other precipitation criteria that warrant them inspecting their facilities for impacts from landslides. These criteria include looking at the precipitation that has occurred within a three-day window and precipitation that occurred over a seven-day window. This is because high precipitation events typically consist of a storm or series of storms that extend over a period of more than one day. In some regions of the world and the United States, spring snowmelt can also be a critical time.

A storm event that extends over several days can have long-lasting effects. It takes time for soil to become saturated, especially at depth, and it also takes time for water to drain out. From that perspective, a review of the daily precipitation data for the storm system that occurred in the Puget Sound area in mid-October helps us to understand the need to look at more than just one day of precipitation. In that storm, the maximum three-day precipitation was nearly 4 inches on October 15th and the seven-day total was nearly 5 inches on October 19th. In other words, we received the more than the average monthly rainfall within a three-day window and the continued rainfall likely helped to further saturate the soil profile or keep the soils wet.

There is also a historical record that shows that significant landslide events tend to occur in Puget Sound’s glacial terrain every 20 to 30 years. This is related to the weathering of the glacial deposits that underlie many of the slopes in lower lying areas of the Puget Sound as well as the cyclical climatic weather patterns.

By carefully analyzing precipitation, historical records, soil conditions and other geologic data, we can help clients monitor and identify potential problems before they develop, and manage landslides when they do occur. Staying alert to geologic hazards is important to our safety and the reliability of much of our basic infrastructure. Our roads, pipelines of all types (water, natural gas and petroleum), and power transmission lines are vital to our lives, our economy and environment. During periods of heavy rain, especially this time of year, it’s important to stay alert to geologic threats and mitigate potential risks before a landslide occurs.

So keep your eyes on the slopes, and if you would like to find out more, give us a call! 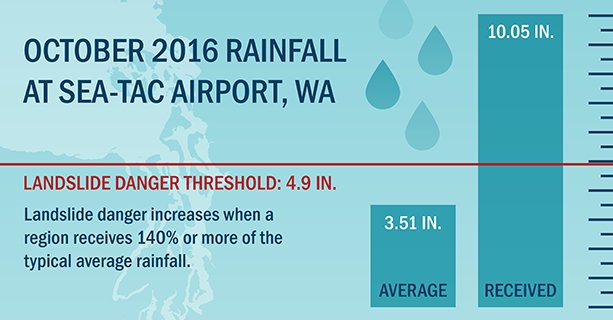