The American Council of Engineering Companies (ACEC) Washington awarded GeoEngineers and our project partners, Jacobs and SDA, the 2015 Transportation Gold Award for our work on the reconstruction of Washington State Route (SR) 530 after the Oso Landslide.

The  catastrophic landslide on March 22, 2014, near Oso, Washington, flowed thousands of feet across the Stillaguamish River valley, obliterating dozens of homes and spreading 10 million cubic yards of mud, trees and debris over a half-mile area. The slide buried approximately one mile of SR 530—a critical highway that connects a string of rural communities—with up to 20 feet of debris, closing it for four months.

It was against this backdrop that GeoEngineers, as part of Atkinson Construction’s SR 530 Emergency Roadway Reconstruction design-build team, began working with the Washington State Department of Transportation and local stakeholders to rebuild the roadway and deliver much-needed resources and hope to the area. GeoEngineers and the design-build team helped the agency manage some of the most difficult conditions it had ever faced while also saving more than $5 million over its projected cost. The new roadway reopened exactly six months to the day of the slide—one of the fastest design-build deliveries in state history.

With the ACEC Washington Gold Award, the entry will now go on to compete for top honors among some of the biggest and highest-profile engineering projects in the country at ACEC’s national awards in Washington, D.C., later this year.

GeoEngineers Principal Geotechnical Engineer Shaun Stauffer, PE, LEED® AP (pictured right), who accepted the award on behalf of GeoEngineers, will give a keynote presentation about the project on February 16 at the Geosynthetics 2015 Conference in Portland, Oregon. 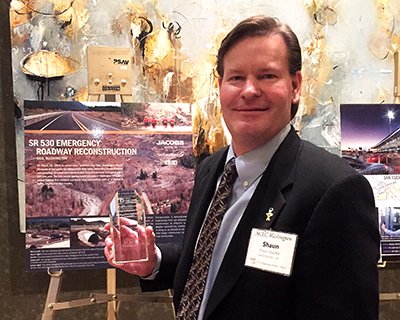