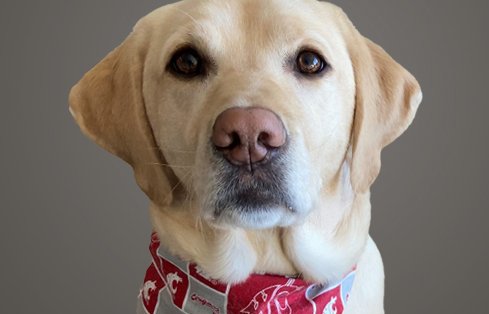 Fuego’s passion for people makes him a valuable part of our human resources team. He loves meeting new friends and is always ready to represent GeoEngineers with a smile.

Fuego began honing his people skills at an early age. He trained as a guide dog for the blind while growing up in California, but after more than two years in the program he decided that wasn’t the career for him. Fuego’s passion for people eventually led him to Abbie Fiano and GeoEngineers.

A self-described “good boy,” Fuego is always attentive to the people around him and does his best to keep everyone happy. When in doubt, he’s quick to entertain new friends with his favorite “pogo” trick.

“He jumps straight up and down with all four feet off the ground like a pogo stick,” Abbie explains. “He’s very proud of it.”

When he’s not out networking for GeoEngineers or entertaining his coworkers, Fuego likes to spend the day rotating between the couch and his bed, following the sun through the windows. If he’s feeling more active, you might find Fuego swimming at the beach or looking forward to his next visit to the coffee shop.

“I love everything food related,” Fuego says, “but I get particularly excited when I see that drive thru window and know that a puppicino is in my future.”