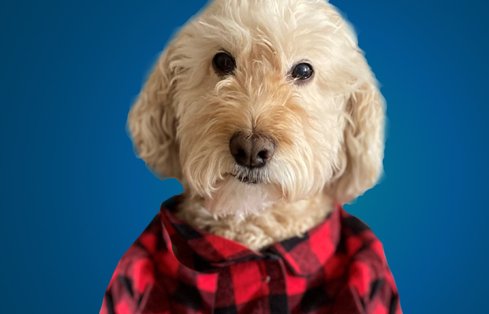 Griffin’s attitude and resilience are an inspiration to all his GeoEngineers colleagues. Several years ago, he was abandoned in the woods of Rhode Island and left to fend for himself. By the time a hiker found him his fur was so matted that it had cut off the circulation of one of his legs. Griffin recovered thanks to the kindness of the hiker and a local vet, but he lost his leg in the process.

“He was originally adopted by a vet tech, but then that vet tech had to move to Singapore,” says Principal Environmental Scientist Sue Bator. “I happened to be looking for a dog when Griffin needed a new home. As soon as he hobbled across my front yard, I knew he was my soulmate.”

Sue introduced Griffin to GeoEngineers, and he’s making the most of his internship experience by sticking close to Sue.

“Griffin is my shadow and follows me around wherever I go,” Sue says. “Everything he does is his ‘favorite thing’ in that moment.”

No matter where he is, Griffin likes making people smile. He enjoys riding behind Sue’s bike or in his special backpack where he can watch the world go by in style. After a long day, Griffin likes to relax at home with some tennis balls, dehydrated cheese snacks, and lots of cuddles.